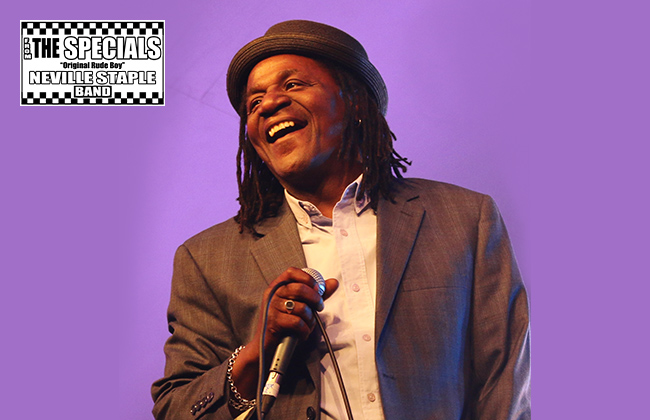 “Nothing came close to the sensational Neville Staple Band who really got the party started and had the masses dancing along” Anita Merritt-Exeter Express & Echo.

Neville Staple, Legendary front man of The Specials, Fun Boy Three and Special Beat, also known as The Original Rude Boy, is credited with changing the face of pop music not only once but twice. His celebrates a super 40-year career in the music business which is well documented and started out from the early days with Ray King, Pete Waterman, The Coventry Automatics and his Jah Baddis Sound System, before taking to the stage with The Specials during the famous ‘Clash’ tour.

Neville states, “I remember the massive reactions to the hit songs like Ghost Town, Too Much Too Young and Gangsters and fans still write to me about my rugged, energetic and fun stage presence. The way we brought ska to the mainstream was by mixing Jamaican music with the English style, which at the time was punk. A lot of young bands are now putting their own spin on ska -some with dance music and some with a rock beat. It’s all good. The music just makes you want to dance. Even when singing about tough times, every-day things or bad things, the beat and the rhythm makes you want to move. I turn all our live shows into a massive party. The crowd love it and sing along to all the tracks!”

Neville’s 2-Tone legacy is huge. 2-Tone fused traditional ska music with punk rock attitude, energy and musical elements. The movement helped to transcend and defuse racial tensions in Thatcher-era Britain. The actual black and white chequered imagery of 2 Tone has become almost as famous as the music itself.

Neville Staple continues to write and produce music and along with his wife and manager, Christine Sugary Staple, he works with schools, charities, university and youth groups providing talks, performance tips, music lesson guest-tuition and fund-raising activities. In his hometown of Coventry (where 2Tone music was born), he is celebrated as a Living Legend. He worked with the Lord Mayor to support Coventry in winning the ‘City of Culture 2021’ bid and was recently presented with a ‘Lifetime Achievement Award,’ during a special performance with the children of Foxford School. Now as patrons of the historic Albany Theatre, Neville and his wife continue to work with inner-city children on various creative projects. Neville’s work and performances are regularly screened on mainstream TV.